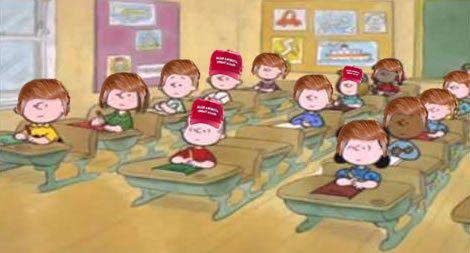 You remember the gag on Charlie Brown where when an adult spoke, all you heard was a muffled horn whining “wha wha wha”.

President Trump reminds me of Charlie Brown’s teacher.  While the rest of us hear nonsense, captivated students, understand every syllable and happily do what ever the horn tells them to.

While we, onlookers try to gasp one tiny bit of coherence coming from that blasted horn, the devoted cater to its every whim.  Of course, I’m talking about Trump-heads now. You know the ones that ramble on about how much Donald Trump has already accomplished in office.  It’s usually followed by a rant on the deep state before it devolves into Clinton Foundation jabberwocky.

Trump keeps on talking, but the “KKK and BLM Got Off The Same Bus” crowd is the only one that still understands what the heck he’s saying

Cancel reply
Why Donald Trump Should NOT Be Impeached.
To Top
0