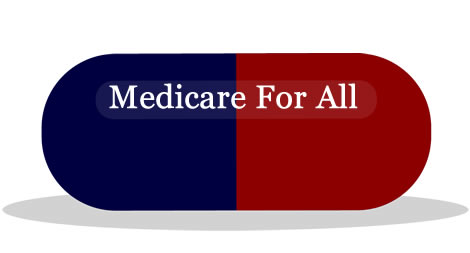 With all this talk of skinny repeals and the Conservative American Health Care Act, or as I call it CAHCA (say it out loud), I thought it would be a good time to explain to my conservative friends why the only real solution to our health care woes is to develop a new system that works for everybody.  No system is perfect, but the one we have now is ridiculous, and it’s been that way for decades.  The ACA, or Obama Care isn’t perfect, and I know rates have gone up, and some people couldn’t keep their Doctor.

My more progressive friends will say that a lot of people got coverage from the ACA that didn’t have it before, and that’s true.  Coverage is up, but that was only part of the problem.  The real problem is cost.  The cost to treat illness, and more importantly the cost to prevent it.  Passing the ACA without a public option, and the Supreme Court ruling that tore out the heart of the medicare expansion in places that needed it the most, was not the answer either.

I know too many people who still don’t have health insurance, which means they go to the emergency room to get medical care.  When they can’t pay, people who do have insurance see their premiums rise. When my conservative friends start talking about “Socialized Medicine”, I like to point out that Republican icon Ronald Reagan is responsible for establishing universal medical care, with the Emergency Medical Treatment and Active Labor Act .

So what we have now is a system where if you don’t have insurance, you get emergency medical care for free, in a hospital emergency room, the most expensive delivery method for medical care anywhere. No matter what the republicans do with their CAHCA, the EMTALA (signed by President Ronald Reagan), will make sure that prices continue to rise.

If many of these uninsured people showing up for medical care at emergency rooms had health coverage, their care would be cheaper.  If I’m having to pay for someone’s medical care, I want to get the best deal I can.  The current system does not meet my criteria.

I try to be a problem solver, and the first thing I do when I want to solve a problem is seek out similar problems and find the solutions that have worked.  Well guess what; the jury is in and the the data is indisputable.  The system that gives the best results for the lowest cost is single payer.

Nations with the best healthcare results

Spain, Austria, Japan, Norway, United Kingdom, Germany, Australia and 26 other countries have more efficient systems.  The US is in 37th place in healthcare efficiency  – (Source)

All these nations,   have one form of single-payer or universal healthcare systems, and they ALL cost less than the US system, while providing better results. – (Source)

A Healthcare Solution Right In Front Of Our Eyes

We already have a single payer system that enjoys 77% approval in the United States; it’s Medicare.  It’s the most efficient health insurance in the world, and although it isn’t perfect, it’s the best plan that is already being used in our country.

Medicare’s operating costs of between 1-6% are more efficient than France, Germany, Japan, Norway, Australia and the United Kingdom and pretty much every other system in the world.  Considering our private based system now costs us around 17% in overhead costs, that’s a huge savings in just the administration of the healthcare system alone.

That’s right, Medicare is extraordinarily popular, and one of, if not the most efficient healthcare delivery system in the world.

It’s so embedded into our national psyche that I don’t even have to explain what it does, you already know.   So, why can’t we extend it to all of our citizens?  Why not have Medicare for all?

The answer, as it usually is, is politics.  The Republicans need money from big insurance to fund campaigns that lie about single payer health insurance.  Sure, you’ll hear Republicans talk about a regulation free market-based system that will give people unlimited choices and cost less than it does now. When I ask my Republican brethren to give me an example of where it’s worked, I hear crickets… then this “Tell me when a single payer system has worked, then?”

I reply that I can give them a list of 36 examples with documentation, that are more efficient and effective than what we have now.  When they refuse the offer for evidence, I ask them how they (or their parents) like their medicare?

Many of my friends have developed their on ways of changing the subject when I throw logic back at them.  They always employ that technique here.